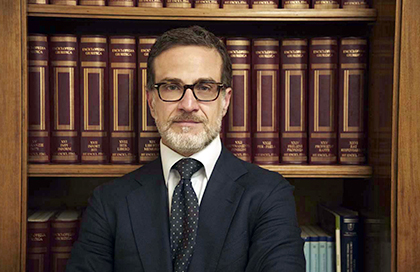 Following the competition announced by the Council of the Rome Bar Association, he was appointed Second Secretary of the XIX Conference of Young Lawyers.

Founding partner of the Firm, he carries out his professional activity by assisting companies operating in various sectors (Health, Industry, Commerce, Construction, Credit), in labor law matters, in out-of-court and judicial matters, as well as in procedures and trade union disputes.

He is the author of several contributions in the field of labor, civil and bankruptcy law, including:

– Transcription and deadline for exercising the right of redemption, in Giur. Const. 1990;

– Donations between spouses and bankruptcy, in Giur. Cost., 1993;

– Threat of dismissal and resignation of the worker, in Temi Romana, 1993;

He is one of the authors of the annotated form of the Civil Procedure Code published by CEDAM and of the Hypertext Civil Code published by UTET. order of the legal profession and at the Convention “Health responsibility: recent civil, criminal and insurance developments”.

He was a speaker at the Postgraduate Course in Economics and Health Management organized by the CEIS Economics and Management Laboratory at the Faculty of Economics of the University of Rome “Tor Vergata” (from 2000-2001).

He was professor of hygiene and safety in the workplace for the 2001-2002 academic year as part of the University Diploma course for Labor Consultant set up at the Faculty of Economics of the University of Rome “Tor Vergata”.

Speaker (on the subject of layoffs) at the “Il Collegato Lavoro” Workshop organized by the Pessi e Associati Law Firm.

Speaker (on the subject of the special rite for dismissals) in the context of the Workshop “The Fornero Reform (Law 92/2012)” organized by the Pessi e Associati Law Firm.

Speaker (on the subject of autonomous collaborations) in the context of the Workshop “The Jobs Act – From the delegation law to the implementing decrees” organized by the Pessi e Associati Law Firm.

Speaker (on the subject of privacy) at the Workshop “Latest news from labor law: good news?”, Organized by the Pessi e Associati Law Firm.

He has a good knowledge of the English language.