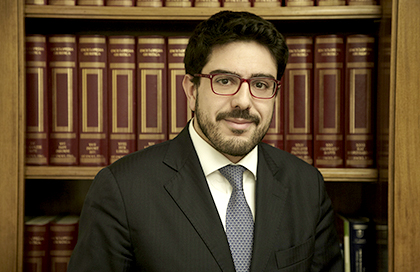 Graduated with honors in Law in 2006, at the Luiss University “G. Carli ”in Rome

Since 2007, he has collaborated with the Pessi e Associati law firm carrying out judicial and extrajudicial assistance activities with reference to the issues of labor, trade union and social security law, as well as in relation to the management of industrial relations, in favor of national and multinational companies operating in the aerospace, defense, transport, media and Travel, Leisure & Tourism sector.

He collaborated, from 2005 to 2006, as an intern, and from 2007 to 2014 in an off counsel position at the office of prof. lawyer Piero Alberto Capotosti, where he has gained extensive experience in the field of constitutional litigation.

Research fellow in Labor Law at the Department of Law of the Luiss Guido Carli University in Rome.

PhD in Labor, Trade Union and Social Security Law at the Faculty of Economics of the “Tor Vergata” University of Rome.

Since 2009 he has been a member of the Reggio Calabria Bar Association.

He has had teaching positions at the School of Specialization for the Legal Professions of the Luiss Guido Carli University in Rome, as well as in numerous Masters and post-graduate training courses, including the Master in Economics and Management of Supplementary Pension, the Master Legal Advisor and Human Resources Management and the Master in “Procurement Management in the Public Sector” – GASP at the Luiss Business School in Rome.

He is the author of academic writings and essays, including: The discipline of early retirement (2014), Disability and labor law. The compulsory placement (2013), The non-competition agreement, (2012).